Rae sent me this link to a magnificent looking lemon slice.

As soon as I opened up the page I knew I had to make it – I’m an absolute fool for anything that is lemon flavoured, and a lemon slice like this one is right up there. It was comparatively easy to make, nothing to technical to deal with but I was perplexed when it came out – the base was on the top and I thought it was a complete failure.

It took me a little while to realise I needed to turn it over on to the cooling rack. Forgive me, I am new at this. 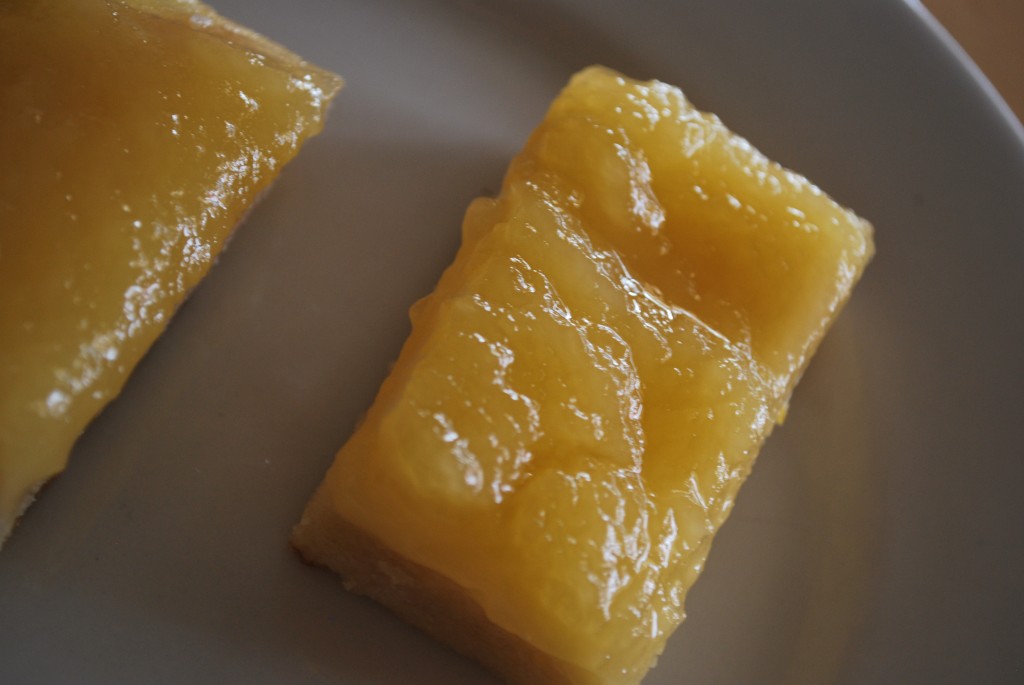 It’s a great tasting slice, although I may have been a little bit heavy handed with the lemon juice, even by my standards. Rae says it can go on he make again list.

This far in to my adventure and I need a big ceramic mixing bowl, a micro plane (?) for zesting and a new heavy duty sifter.

I’ve been reading the Age’s Good Weekend for decades now and always skipped right past the recipes, I mean, only clever and insanely talented people could ever cook/bake them. Mere mortals need not apply. 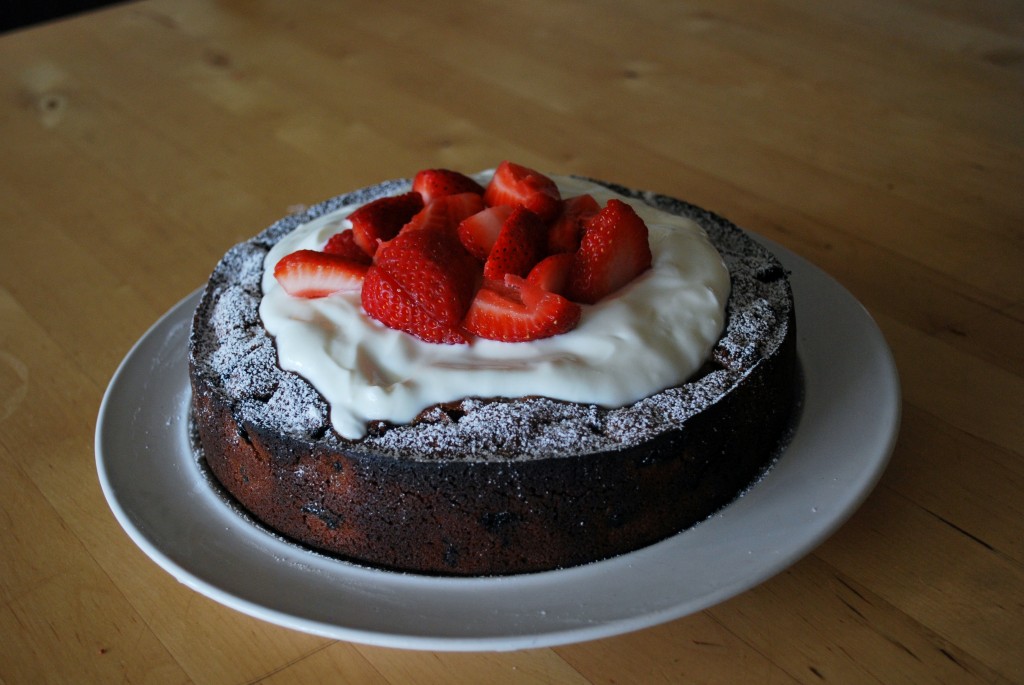 This morning I paused on Neil Perry’s Strawberry and Yoghurt cake. It looked delicious and when I looked it seemed almost too simple to be true. No eggs and polenta made it different to anything else I have baked so after grabbing some polenta from Coles I set to work.

I took my time, didn’t stress and it worked! Two hours in the oven is a long time to wait to see how everything turned out but the wait was well and truly worth it. The kids weren’t too impressed with the yoghurt topping (“ugh, too sour” cried Moo) but they loved the cake. Rae loved it all. Next time I’ll whip some cream for the top. 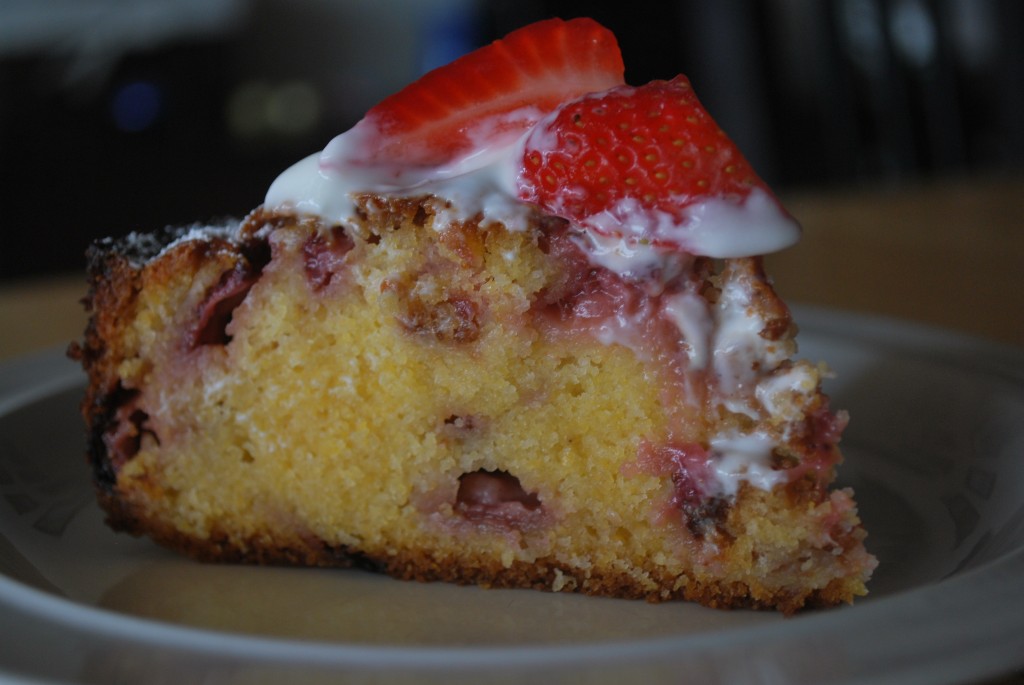 With the Queen of Cakes coming for dinner I decided to risk it and contribute a dessert of my own.

Rae had gone through Margert’s book and selected a few recipes for me to try and after a quick look in the pantry to see what I could bake with what we already had the winner was Raspberry Jam and Coconut slice.

I was pressed for time and it showed a little in the presentation of the finished product but they taste amazing. Considering I’ve all but given up sweet things the sugar hit from two of these had me buzzing but considering it’s the next morning now and they’ve almost all gone they’re going down as a success.

One thing this lot taught me is patience. I almost ditched the dough for the base because, to me, it seemed to be taking too long to come together in the processor, and I need to be more patient for the creaming stage. 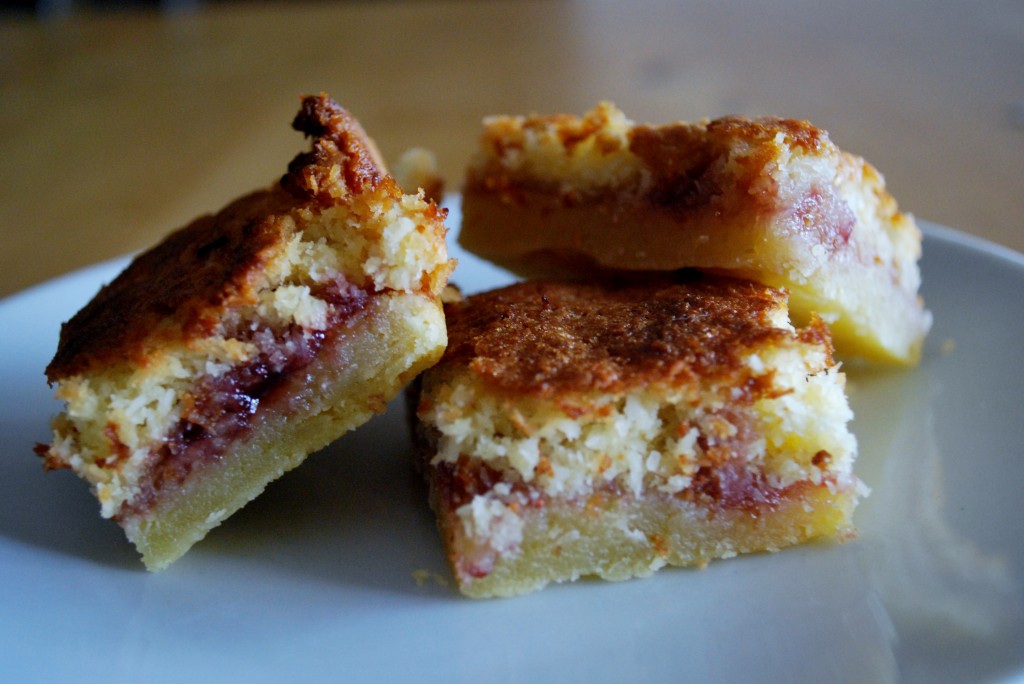 I didn’t plan it but I’ve made two peanut butter sweets in a row. In her recipe Margaret says she adapted an American recipe for peanut butter cheesecake to Australian tastes – I assume it’s a little less ‘heavy’ and lighter on the peanuts.

This recipe called for Wheaton Chocolate biscuits but the local Coles didn’t have any so I opted for Chocolate Ripple instead – not sure but I think they may be heavier than Wheaton’s. I also had to adapt as I didn’t have a small enough flan tin so, to avoid spreading the crust too thin, I used a baking tin instead. 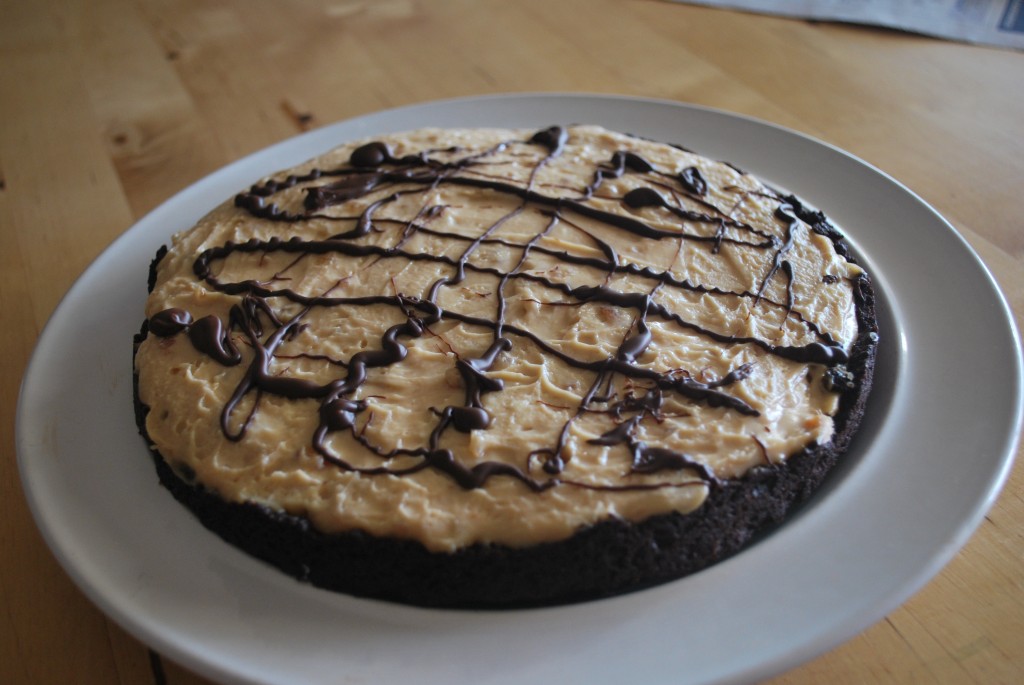 It was also my first go at decorating (and I use the term very very loosely) with melted chocolate. I need to work on the control here. A thicker bag and steadier hand would have helped.

I made it last night and let it chill overnight in the fridge before applying the chocolate. It’s now back in the fridge waiting for the verdict after tonight’s dinner. 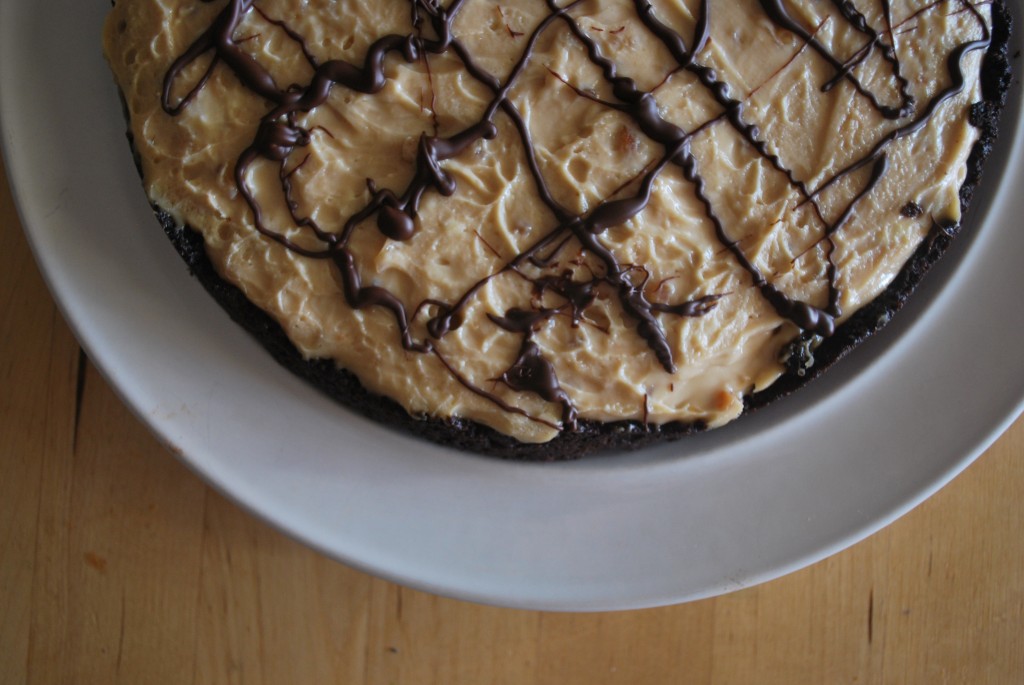 Sunday afternoon and a school week looming so I thought I’d make some biscuits for school lunch boxes. Rae had found the recipe for peanut butter biscuits in Margaret Fulton and commented that she’d like them so what Rae wants…

The highlight was getting to use my mixer for the first time. Low-light was I wasn’t too good on the creaming of the sugar (more like mixing it up a bit and nowhere near enough) but in the end it didn’t seem to matter too much. The bigger factor was the oven. The first batch I put in at the top of the oven and it was too hot, While not burnt they are bit too dark. The second lot I lowered the temp and moved them down to the middle and, to quote Goldilicks, they are just right.

Rae’s had one and loved it, I think it needs more peanut taste. I’ll let you know what the kids think. 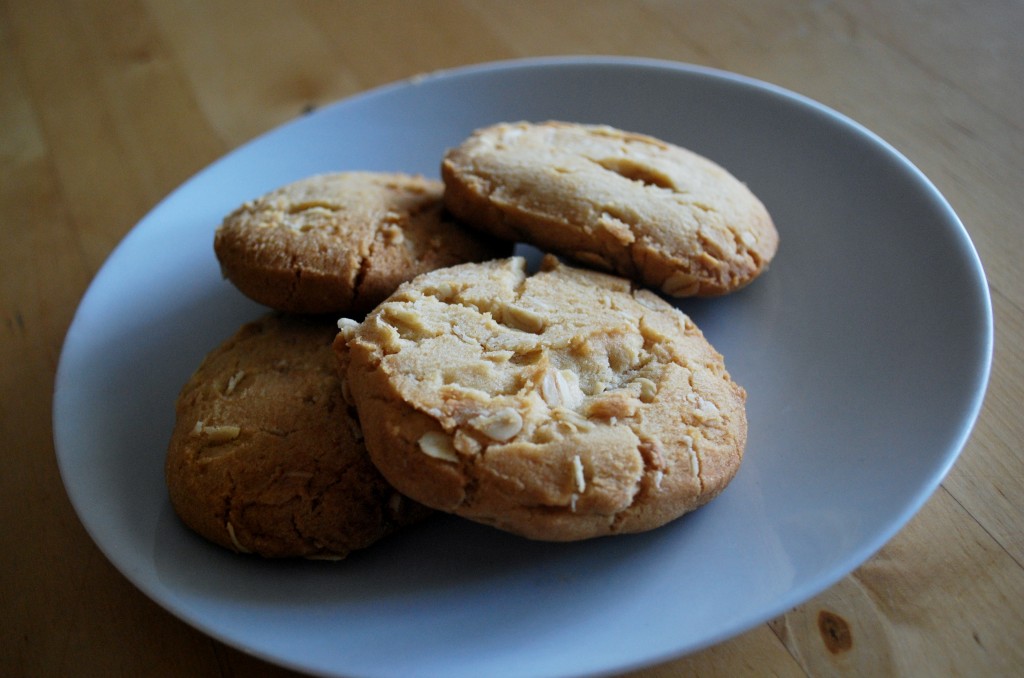 It’s the little things in life that make you smile.

This morning I had my first follower on twitter for @tonybakes which is pretty cool. But even better, this follower – the wonderful Joan – has sent me a recipe to try. It’s an American recipe in a couple of senses. Apart from coming from Texas via Washington it has what I would consider to be very American flavours and ingredients; spices and Cranberry in a biscuit, or cookie given where it comes from. Here it would probably be served more as a slice so that’s what I’ll do. It’s now on the agenda for the next week.

Thanks Joan, I’ll be letting you know how it goes.

Light, fluffy and a good sweet hit from the blueberry’s. Next time I may add a little more orange juice, just to bring out the orange flavour a bit more. Served with thick cream. The whole cake was gone in two sittings.

Source : Margaret Fulton Baking
Complexity : Simple
Preparation Time : About 15 minutes
Baking Time : 2 x 20 minutes
What I Learnt : Our oven is 20 degrees or so cooler than it should be. Don’t be afraid to add more flavour. Add lots of five minutes extra cooking instead of ten minutes.
Issues : Base and side stuck to tin a little – more greasing required.

Last day of the working week and the urge to have a cake for sweets tonight struck. We had all the ingredients in the pantry and fridge so I decided to go with Marget’s orange and blueberry cake.

It was a simple recipe, I didn’t even get to use my new mixer and took next to no time to put together. I didn’t have a flan tray (although both Rae and I swear there’s one here somewhere) so I used a cake tray instead. I think this made the mixture a bit thicker than it should have been because the cake needed an extra ten minutes to cook through int the middle. The edges stuck to the tin too, have to make sure I grease right in to the corners, but it came out okay with a little care. 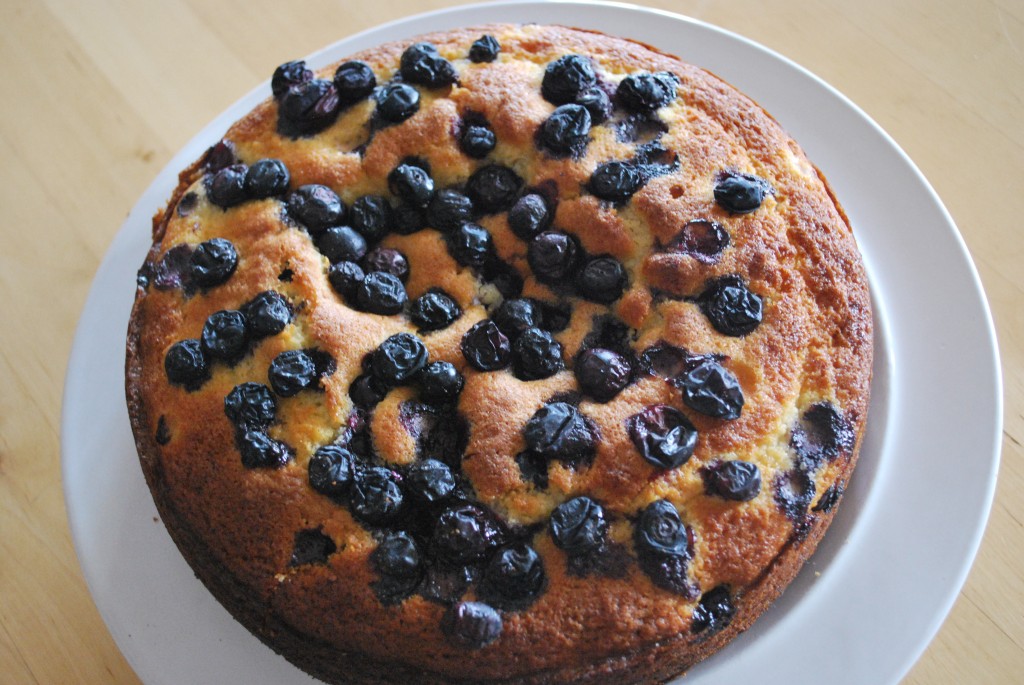 One reason I’ve not done too much baking is that you really need a mixer. I have had a hand mixer but that’s no the best for big jobs. I’ve been wanting a proper mixer for ages but they are so expensive, $300 for a good base model. I was talking about them with Rae on Saturday and a few minutes later a message popped up – she’d found one on Ebay. One we’d been looking at that cost  $299 and here it was – $150 bid or $180 buy it now with only four hours to go.

I placed the bid and immediately wished I’d bought it now. What followed was a tense four hours, hoping no one else would be looking for a Sunbeam Mixer in Geelong on Australia Day. Lucky for me no one was and we won the Ebay steal of the century – $150 for a Subeam Mixmaster MX8500Y.

We went for a drive and picked it up today. 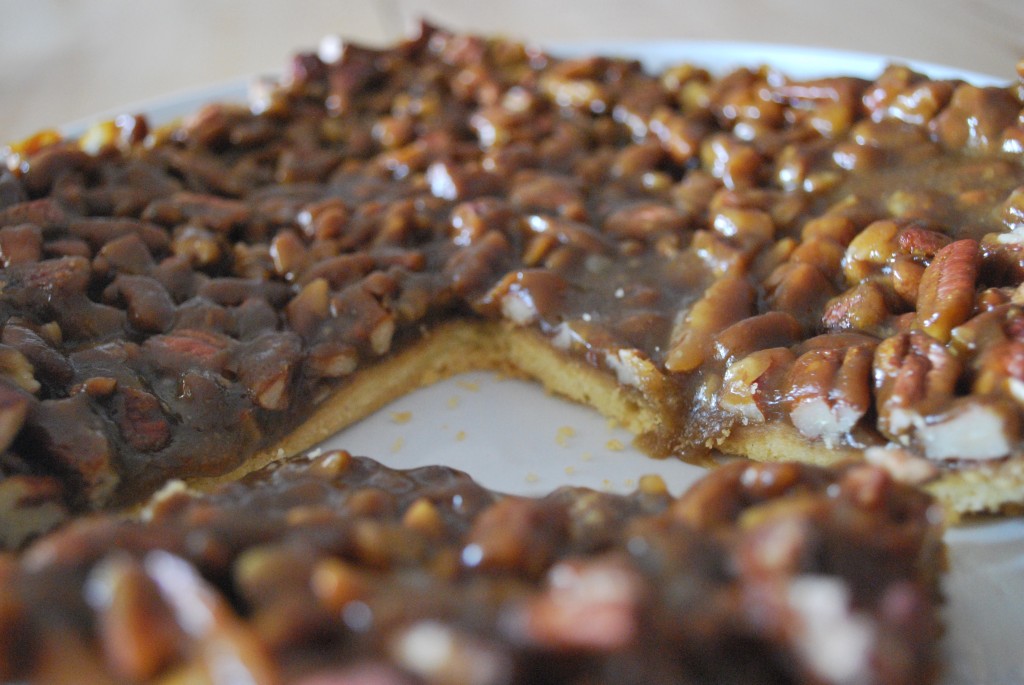 When Rae was flicking through the recipes in Margaret’s book she saw the caramel pecan slice and her eyes rolled back in her head. 12 years and and I had no idea she loved Pecans so as she is currently immobile and feeling a little down I thought I’d give it a shot.

I had to buy a square slice tin and we’d run out of golden syrup so I had to a second Coles run but the results were worth it. When I first looked at the recipe I saw you had to rub the butter in and grumbled under my breath but then I read the note – use the food processor to make the dough. A ten minute chore turned in to a one minute breeze. The butter and sugar crumbed up in about 30 seconds and after adding the egg another 30 seconds I had the dough.